Paradox in the snow 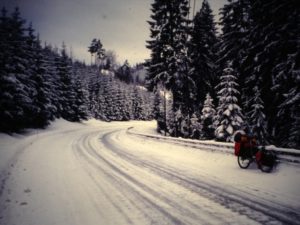 On my way to the North Cape in Norway

Snow swirls through the air. Stings my eyes. Snowflakes touch me, sometimes melt, attach themselves to my clothing, bicycle and equipment. Slowly, almost imperceptibly I’m covered by it. A steady invasion of nature. I clear the snow off my coat. They don’t give up. Increasingly larger flakes descend from a grey speckled sky. Fighting for the best position to attack. Then a sudden gust of wind surprises them and blows them away. Cold wind that in turn chills me to the bone, numbs my feet. Awful stinging wind. Sssssshhhhhhhoouuuuuuwwww! the wind sighs.

Since I’m in Norway something strange has happened to the landscape. All familiar colours around me have disappeared. Trees are no longer green, but of a dark Van Dijck-like red-brown purple, almost black. Same with the grass and the plants that grow underneath. Wasn’t grass green? Where’s the green? Is green still green? And then the water! The water that flows between the lead grey rocks beside the road isn’t clear and liquid. It emits cold, icy cold. Lonely bitter cold. And it seems thicker than normal. Almost syrupy. Slow water, endless slow rippling water.

The snow hypnotises me. Absurd thoughts flow through my mind. I’m cycling without moving. Curves in the road move the world around me. My wheels turn the Earth beneath me.

From my bike I have a magnificent view. I’m sitting first row, gazing at my surroundings. This is the reality I was looking for. Without the fake layer people have covered it with. Without the usual artificial additives that make me comfortable and that blur my ability to perceive. Pure reality. Terrifying reality. And at the same time irresistibly attractive. My quest for the holy grail. The reflection of my mind in the illusion of reality. 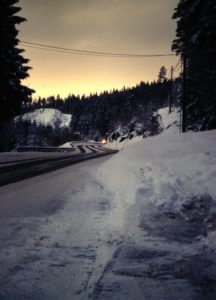 The snow hypnotises me. Absurd thoughts flow through my mind. I’m cycling without moving. Curves in the road move the world around me. My wheels turn the Earth beneath me. When a butterfly can cause a hurricane, what can I do if I really put my effort into it? With difficulty I create a storm in a teacup, which freezes immediately. Not a great success, but a nice start after all.

Now I’m walking beside the road and see a lonely cyclist next to me. The guy looks at me and waves. Suddenly the image shakes, swirls around my head, pulls me into a depth of darkness. Then I wake up and stare at a lightly waving tent cloth, slightly entangled. Only minutes later I realise where I am. And several hours later I’m back on the bike. Someone is walking on the roadside. I wave.