Sven van Asperen and Boris Krielen are travelling 3,200 kilometers from the Netherlands to the North Cape in Norway. By mountain bike. With heavy carts filled with food, fuel and gear. In wintertime. 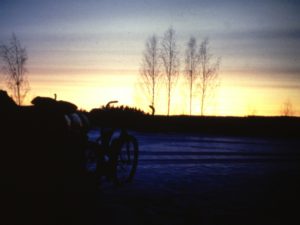 Today starts off like a real Monday. The metal tube connecting the cart to my bike is halfway torn. Again. It’ll take hours to find someone who can weld this. Luckily some helpful people bring us and the broken cart to a friend at a local metal workshop. While he’s repairing the structure, we’re invited for lunch. As both Sven and I lost a ton of weight over the past weeks we accept with confidence.

Finally we’re on the move again! It’s been 4 pm. We’re trying to make up some of the lost time, though it seems this day has other plans. The road we’re following is a narrow scenic route across every steep hill in this part of Sweden. Two small bikers dragging huge carts over a never ending snakelike road. Madness.

Darkness is around us now. Traffic increased. The fast driving cars make me nervous. To escape this danger, and for more obvious reasons, we’re taking a break and a snack aside the road at a bus stop. The hard work kept us warm so far, but now we’re getting cold fast, so we put on some more layers. Our snacks are sandwiches with meat and salmon offered by the friendly people who helped us earlier with the cart.

It looks mysterious, spooky. We both get the creepy feeling something is staring at us from the forest.

This weird situation makes us laugh. The cold and darkness around us, the unexpected luxury food on this tough expedition, the effect of the bulky cloths we’re now wearing, specially the funny hats with large ear flaps that make us look like the bears from the Muppet show, the surprised looks of people passing by, and just because we are here.

After this culinary stop it’s time to look for a place to spend the night. For miles around there’s nothing but freshly ploughed fields. We keep on biking into the darkness; the snow covered landscape is passing by slowly. I could be sleeping, maybe I am. What feels like hours later we reach a dark forest.

Soon we find an open space big enough for the tent, not too far from the road. We unpack all the gear from the carts, which has turned into a smooth routine by now. Shortly after we’re done and ready to hit the sack. Busy as we were we didn’t pay much attention to our surroundings, till now. The trees close to our little campsite are visible, but a few yards further away it’s pitch-black. It looks mysterious, spooky. We both get the creepy feeling something is staring at us from the forest.

We briefly look at each other. It’s obvious we cannot go to sleep now. We decide to take a closer look, armed with flashlights. It’s quiet. The only sounds come from cracking twigs and crispy snow under our boots. For a while we follow a path. Actually it’s more like a row of water filled pits covered with a thin layer of broken ice. Soon the path disappears completely. I turn off my flashlight. The moon shines upon the trees and the snow around us. It’s magically beautiful and scary at the same time. Like any moment something supernatural could happen.

Several times that night we believe to hear suspicious sounds coming from the forest. But nothing bad happens. And when the sun rises, with the darkness all the mysteriousness disappears as well. Only in my thoughts they stay, together with all other memories, forming the reasons for this trip, and all that will follow.