The summer of 2009 started early for me. I was already on my way to the Alps by mid June. I had planned to start with some climbing in the Austrian Glockner mountains for acclimatisation. Unfortunately the weather didn’t follow the forecast – as usual – and it turned out much worse, with loads of fresh snow. It all looked rather grim and after hearing about a deadly accident on the Grossglockner I decided to go elsewhere. 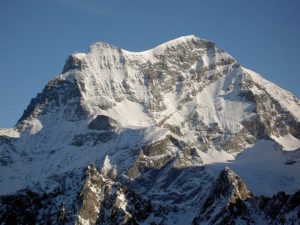 So I drove south to the colourful town of Lienz, across the border to Italy, followed the Brenner Highway for a while to Bozen, and ended up in Zernez in the Unter Engadin in the easternmost corner of Switzerland. It was nice and quiet there, except for some locals it was totally deserted.

I was the first visitor in the Lischana hut. The hut keeper had just got up there himself and was preparing things for the coming season. I made several trips and climbed 15 peaks of about 3000 meter. I felt strong and ready for something higher and more challenging.

I drove further west over the many high mountain passes of central Switzerland. After some scrambling at the foot of the Eiger and a solo climb of the Lagginhorn, I decided I wanted to have a go at the Grand Combin, that huge solitary mountain on the border of Switzerland and Italy, between the Mont Blanc and the Matterhorn. 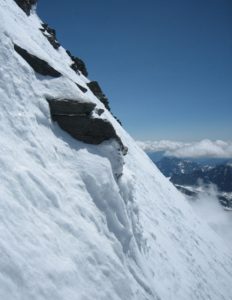 The next 2 days I stayed at a small campsite at the end of the Aosta Valley in northern Italy to prepare my gear and wait for good weather. There was plenty to do, like washing my climbing cloths, sharpening my crampons and ice axes, pack my backpack for the 3-day trip, reading about the route, check the map, and memorise it all, and last but not least eat and drink plenty to recover. Then I drove back up to the border at the Grand Saint Bernard pass, left my car at the small village Bourg-St.-Pierre and started walking up the endless valley to the Cabane de Valsorey at 3030 meter.

Those days walking in the Engadin with a full backpack now really paid off. It took me little over 4 hours to reach the refuge. There were no other climbers there, only the hut keeper and her daughter. They prepared a nice hot meal and gave me details about the routes and the current conditions. The steep south face was in great condition they said, all covered with a solid layer of snow. As it had been snowing the previous days and no other climbers had climbed the mountain, there would be no tracks to follow or anything. I was stoked and eagerly looking forward to the climb which promised to be a true solo experience. 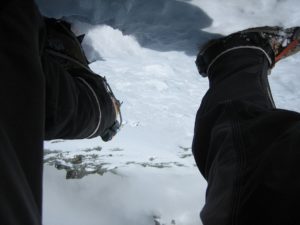 The next morning I was outside at 4am. The hut was wrapped in clouds, making route finding very difficult. The terrain above the hut is not technical, but one has to navigate between some steep rocky slopes before you reach the Meitin glacier. I hate to climb in darkness and with the fog it would be even worse, so I decided to wait a while and see if the weather would improve. At 7am it looked slightly brighter and I took off. Soon the last bits of cloud disappeared and the sky was all clear blue.

I first made my way up towards the Col du Meitin, then traversed to the right over steep snow and ice to the flat Plateau du Couloir, with the tiny bivouac shelter Biagio Musso at 3662 meter. From there I had a first glance of the day at the awesome south face of the Combin de Valsorey. Often this face is a barren wasteland of steep fragile rock, where falling stones make an ascent very dangerous. But now the firm snow made it a lot safer and perfect for a solo.

I had a quick bite and took some shots of the face above me and the scenery around it. Most of the valleys were covered by clouds, but Mont Blanc was clearly visible from up here. Then I took my 2nd ice axe from my pack and started climbing. 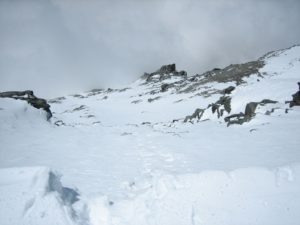 Looking down the Combin de Valsorey South Face from the top

From this point the face is little over 500 meter high and on average 45 degrees steep, a bit less at the beginning and slowly steepening higher up. With both ice axes I felt perfectly safe moving up without a rope. The snow was nice and firm, soft enough to give my crampons and ice axes a good grip, hard enough to prevent me from sinking in.

I followed a diagonal line in the direction of the summit of the Combin de Valsorey, alternately climbing straight up using both ice axes and the front points of my crampons, and traversing to the right putting my feet sideways and using only 1 axe for balance. That way I could give my calves some badly needed rest.

About half way up I took a short break, securing myself to the face with my ice axes. Straight above me I could see the rocks of the western shoulder. Further to the right, still far away, the summit cornice was visible. Between my feet I could look down the precipice which disappeared in the clouds far below. I wasn’t scared or tired and had no problems with the altitude whatsoever, just enjoying this climb tremendously.

I made good progress even though I took my time making sure each step was placed firmly in the snow. I didn’t want to hurry. One slip here and I’d be at the bottom again in no time. It’s highly unlikely one could stop oneself on a slide like that. 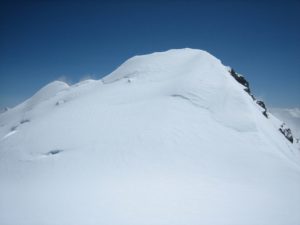 After my break I traversed to the right into a wide gully. Higher up the face seemed to steepen even more and I had to zigzag between some vertical rocks. Finally I reached the small summit cornice. I chopped away some of the snow and minutes later I stood on the flat summit of the Combin de Valsorey. There is a huge plateau up there, almost 800 meter wide, stretching from the Combin de Valsorey to the main summit, the Grand Combin de Grafeneire.

It was by now almost 12 o’clock. So it had taken me 2 hours and 45 minutes to climb the face. I asked myself if it was too late to continue. Well, the Grafeneire was my real goal for the day and it didn’t seem so far away. Besides, the weather still looked very good. So on we go.

While climbing on the south face I was in the sun all the time and there was no wind. Halfway up the Grafeneire however the cold northern wind picked up, slowly changing into a blizzard. By the time I had reached the main summit the view had disappeared completely and I was chilled to the bone. I quickly made my way down the northeast ridge, making sure I didn’t get too close to the heavily corniced edge. Then up again over the Aiguille de Croissant and further down to the Mur de Côte. 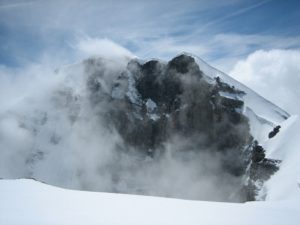 The Mur de Côte is a steep ice step, the only easy passage from the main summit to the western part of the mountain. It gave access to 2 more 4000 meter peaks, the Combin the la Tsessette and the Tsessette W-summit. The snow here had gotten soft and I slowly walked the long distance till I reached the final edge of the mountain.

Now it was time to think about getting back to the refuge, all the way on the other side of the mountain. In a direct line the hut was only 3.5 km away, but of course that wasn’t possible. I had to make a long detour around the north face and over the Col du Meitin.

The safest route would be going back up the Mur de Côte and then descending the NW-face. That counts as the normal route these days. There was also another option from where I was: down the Corridor. The route through the Corridor used to be the normal route, but this route is threatened by a long row of 200 meter high very unstable seracs and is considered extremely dangerous.

I felt I lacked the energy to go all the way back up to the Mur de Côte. Also the weather didn’t look so good anymore. Could I go down the Corridor instead? When climbing up this route one is exposed to the seracs for about 1 and a half hour, which is madness, but going down I could move much faster. 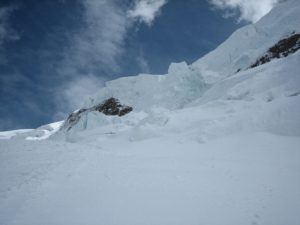 Seracs hanging over the Corridor

I decided to take my chances. As fast as I could I went down, navigating between the crevasses, always keeping an eye on the seracs on my left. Less than half an hour later I had passed the danger zone. On my way I passed 2 huge avalanche cones, which looked very fresh.

From here it was an easy stroll around the NW-corner of the Grand Combin. I hoped to reach the hut soon as it was already close to 4pm. As I reached the corner the clouds came roling in from het north, making route finding very hard again. I had to climb up about 200 meter to the Col du Meitin before I could descent the 600 meter to the hut. But where was the col? Visibility was almost zero. I sure didn’t want to miss the col and end up somewhere on the NW-face. By frequent use of altimeter, map and compass I found the right way up there. I was hungry and tired and very glad there was nothing left to climb.

On the other side of the col the weather looked much better. There were no clouds there and soon I found back the track I’d made that morning. Walking down was so much easier than going up. After almost 12 hours I was back at the Cabane de Valsorey. The hut keeper had been very worried about me and was happy to see me back alive, even though she was severely shocked by my story about taking the Corridor. There were several other guests at the hut and dinner was already served. The end of a perfect day!

On the 12th of July 2009 – only 3 days after my ascent – 2 climbers were doing the same route – Julien Gfeller, a 25 years old German, and 27 year old Vaudois Patrick Denantes. When they reached about 3,800 meter the second climber was hit by a rock. They both fell down 100 meters and died. May they rest in peace.