It’s already late when I walk between the huge stone blocks on the northwest flank of the Mittaghorn. The sun still feels warm on my skin. Far below the valley with the village of Saas-Fee is in the shade by now, but I walk high above it all. 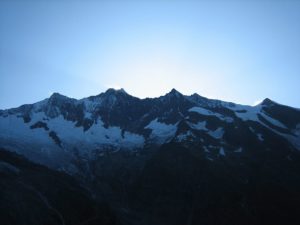 When I finally start the descent, my feet decide to protest big time. I’ve been walking for over 12 hours now. “Why did I have to leave the Brittannia hut so suddenly, so late?” I wonder. There was no clear reason. More of an indefinable feeling of unease. I just had to go.

This morning I woke up at 3 am. After a slow breakfast – I always need plenty of time for breakfast at such an unearthly time – I was the last one to leave the refuge. Some of the other climbers had given me a glance, a vague look of disapproval on their face. It didn’t really bother me anymore, as a solo climber I get those looks a lot. In my head Mark Knopfel asked me “Where you think you’re going? Don’t you know it’s dark outside?”

When I arrived at the beginning of the glacier a large group of climbers was busy putting on their crampons, fixing the rope. As I was alone I only had to put on my crampons and went, onto the ice, leaving the crowd behind.

It’s always somewhat surrealistic, this walking in the dark. The sky black blue full of bright stars, de dark contours of giant mountains, the blueish snow. Slowly the sun crawls to the horizon and spreads it’s light across the ever more spectacular landscape of torn glaciers, sharp ridges, rocky peaks and snowy summits.

I was suddenly overcome by a tremendous thirst. Of course I carried some water with me, but by now it tasted like it came straight from the North sea.

Hours later I climbed the easy snow ridge, reaching the summitcross of the Strahlhorn. An awesome view was my reward. A Swiss mountainguide arriving with his 2 customers was willing to take a picture of me. But he couldn’t resist to vent his thoughts of me being there alone, “Wirklich, Du gehst aleine? Aber das sind Riesen Spalten!” (Really, you go alone? But those are giant crevasses!) Or maybe he was just worried he might have to go back up again later to save my ass. I waved away his remarks with Reinhold Messners words “Es wird schon gehen.” (It’ll be alright.)

Instead of going down directly to the refuge I decided to make a detour and climb the Adlerhorn, a slightly smaller peak next to the Strahlhorn. The route down was easy, but steep ice and rocks on the ridge were blocking my way to the summit. Time flew as I tried to surpass them, without success. Climbing back up towards the Strahlhorn was even less pleasant. As usual on glacier routes the descent went much faster than the climb, and in an hour and a half I was back at the refuge.

At first I felt happy with the climbed peak, had a drink on the terrace, talked to some other climber. But as time went by I felt less and less at ease. At a quarter to 5 in the afternoon I decided to leave the refuge. Madness of course, though the decision was also kind of a relieve. With a gentle but steady pace I followed the route towards the valley. Another 3.5 hour walking. “I’ll see how far I get today”, I thought rather indifferent. The route was very captivating, went up and down across snow and rock. From much higher in the rocks a group of ibexes was monitoring my progress.

When I was almost done with the traverse around the Mittaghorn I was suddenly overcome by a tremendous thirst. Of course I carried some water with me, but by now it tasted like it came straight from the North sea. Not far below me I spotted a mountain refuge, Vernissage Berghaus, an old stone hut with a large terrace. Unfortunately there was nothing left to eat, all I could get was a glass of home made ice tea.

I got comfortable in the soft pillows of the lounge couch. From the refuge relaxed music drifted my way. On the other side of the valley I saw the Mischabel ridge, a long row of pointy peaks. The sun was just touching the edge of the Dom, the highest peak on the ridge. After having had a feeling of being chased for many hours, a pleasant peace came over me. It felt like all those events had to happen that way to arrive at this point, right here, right now. Just as if I belonged to that place.