It was mid August. Helmut Risse and I had just climbed the Mönch, Jungfrau and Gross Grünhorn together in a 5 day trip in the Bernese Alps. Unfortunately he had to go back home then, so I was looking for something I could climb solo. For some time I wanted to do the Nadelgrat, a classic ridge route in the Alps of Wallis.

Two years before Frank Haagsma and I had done the Nadelhorn and Stecknadelhorn, which make up the first and easiest part of the Nadelgrat. The continuation of the ridge over the Hobärghorn and Dirruhorn is more difficult and a lot more exposed. On several occasions I had tried to do the complete ridge solo, from different sides, without success so far.

One time I started from the village Randa and stayed the night at the Europa hut at only 2265 meter. From there I wanted to climb the ridge. Not only is this hut a very unusual starting point for this route, it also means traversing the complete NW-ridge of the Dirruhorn, which makes it a huge undertaking. Still I liked to explore the possibilities. 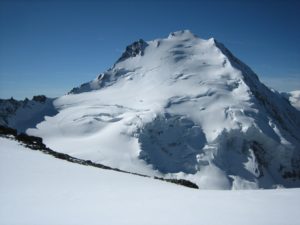 The next morning I got up at 4 am and after a small breakfast, which the hut owner had prepared for me in the evening, I left the hut in darkness. I followed the path north for a while and climbed to the Galenjoch via the Steintälli. There’s no path going up on that side, so I had to find my own way on the steep grassy slopes and fields of large boulders. The sun had now reached the top of the Weisshorn on the other side of the valley, illuminating the north face in bright orange. By the time I had reached the Galenjoch at 3303 meter the weather had changed. The Dirruhorn was covered in dark clouds. A helicopter was flying along the ridge as if looking for stranded climbers, which gave me a very uncomfortable feeling. I decided to change my plans and climb the Gugla and Breithorn, north of the Galenjoch, instead.

Another time I went up to the Bordier hut from Gasenried. It was only mid June then and the hut was still closed. The snow on the Ried glacier was in terrible condition, completely covered with soft snow hiding the countless crevasses. Still I had to cross it to reach the hut. It took me 2 nerve wracking hours. After a good night sleep in the “Winterraum” of the hut I hoped to find my way up the glacier to the foot of the Balfrin and from there across the glacier and up the steep couloir to  the Dirrujoch. Again the weather had turned and visibility was close to zero. I strolled up the Klein-Bigerhorn, but going any further from there was out of the question. 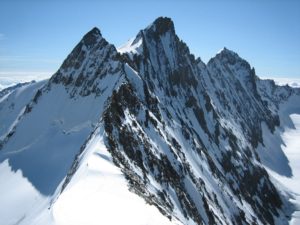 Three times a charm, so up again I went. This time I decided to take the already partly familiar route from the Mischabel hut, which Frank and I had done before. To prevent upsetting the mountain gods I wanted to show I wasn’t lazy or anything and started all the way down in the valley from Saas-Fee, instead of taking the cable car to Hannig Alp. This meant an extra 450 vertical meter over endless zigzags before I reached the via ferrata that is the upper part of the route to the Mischabel hut.

Next morning the noise of other people woke me up at 3 am, just before my own alarm had gone off. I’m a slow starter and need quite some time to eat my breakfast, drink a few cups of coffee and get all set for climbing. This usually means I’m the last one to leave the hut. This time was no exception. I went outside and started with the steep rocky path that goes straight up behind the refuge. Higher up I could see several groups of lights indicating the position of other climbers. 300 meters higher the path ends at the Hobalm glacier. Here several groups of climbers were busy putting on crampons and roping up. As I was all alone it only took me a few minutes to put on my crampons before I was on my way again, leaving most of them behind me. After crossing the glacier and climbing up some steep firn I reached the Windjoch, which welcomed me with an appropriate ice cold wind, sanding my face with fine ice particles. From here the route goes up the easy NE-ridge, though the wind took away most of the fun. I overtook several climbing parties again and noticed that some of them turned back because of the strong wind. I had some doubts about the weather myself as well, but wanted to continue to the summit and decide there what to do next.

From the Nadelhorn I first tried to follow the ridge directly over the small NW-summit towards the Stecknadelhorn, but soon the rocks fell away steeply and I didn’t want to take the rope out yet. That would cost way too much time and also it was very cold up there in the wind on the exposed ridge. So I went a bit down again and traversed under the NW-summit and back up to the ridge again. That took me quite some time as well. Normally this traverse is easy, but this time there was almost no snow, just dark hard water ice. Only the tips of my crampons and ice axes could penetrate the surface. Below my feet the face plunged down hundreds of meters, ending in a maze of yawning crevasses.

After this exciting step it was a true delight to walk on the comfortable horizontal snowy ridge again, which continues with a couple of gentle white waves towards to rocks of the Stecknadelhorn. By now the wind had gone almost completely, and I had a nice breakfast at the summit on the Stecknadelhorn. I felt great and was convinced that today was my lucky day for the route. From the summit the ridge goes down steeply and becomes much more narrow and exposed. The rocks here are made of large plates. On the south side the rocks fell down 500 meter to the Hobärg glacier. On the other side there was 400 meter of even steeper ice. When I was at the Stecknadelhorn with Frank it didn’t look inviting at all and I had not felt strong enough to go on. This time I felt much more at ease, after all the climbing in the bernese Alps. I used my 48 meter rope to secure the first part of my descent. The next part I traversed just below the top of the ridge on the southern side, avoiding some small gendarms.

From the Hobärgjoch the route was easy again for a while. 2 climbers that had start their climb from the Bordier hut had just come down from the Hobärghorn, leaving a nice trace in the deep snow for me. 15 minutes later I stood on the summit. There for the first time I had a great clear view over the rest of my route all the way to the Dirruhorn, which still was very far away. There are 2 ways to go down from the Hobärghorn on this side: traversing through the steep icy NE-flank or downclimbing the almost vertical rocks of the N-ridge. I chose the rocks, which were quite exposed, but still looked more inviting than the ice flank. 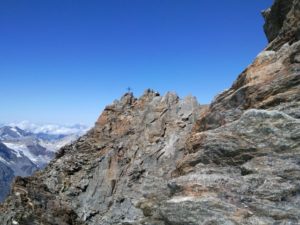 For a long time I continued over easy snow and rocks till I finally reached the Dirrujoch. From there I was supposed to abseil down to the Ried glacier, after I had climbed my final peak of the day, the Dirruhorn. I took some time to eat an energy bar and set off again for the last leg of the ridge. This part was all made of rocks, which were warmed by the sun and had tons of grip. Really nice for a change! Even the last and most difficult piece of the route to the summit cross of the Dirruhorn was no problem. I was extremely happy to finally have reached my goal. Of course I wasn’t done yet. I still had to get down to the glacier and all the wat back to the Mischabel hut.

As the ice in the gully that runs down from the Dirrujoch is often of terrible quality and rocks fall down the steep ice with the rythem of gun fire, the local guides have made an abseil piste in the rocks north of the gully. The first few abseil points were easy to spot, but on more than one occasion I took a wrong turn and had to climb back up again to reach the next abseil point. After maybe 7 or 8 abseils, about 150 meter, I couldn’t find out how to continue. The rocks didn’t end here, but there wasn’t a bolt or schlinge to be found anywhere. So at last I traversed back into the gully. The ice was about 45 degrees steep, hard as stone and heavily carved by meltwater. To make the fun complete small stones were falling down all the time, only to be detected by the whistling sound they made while flying by, aiming for my head and body. 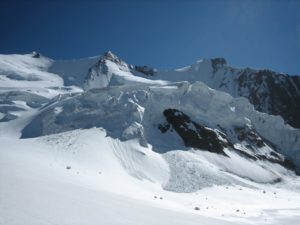 The seracs above the Ried glacier

It wasn’t very far down to the glacier, but still I had to be extremely carefull not to slip there. After I had just experienced the nice safety of the rope while abseiling, I now felt extra vulnerable and rather naked without it. Luckily i could avoid any serious encounter with the stones and made my way safely to the flat Ried glacier. The route description says one should cross the glacier here and traverse over the Ulrichshorn to the Windjoch. That seemed way to far for me, so I turned right and headed for the Windjoch directly, walking under the huge seracs of the north faces of the Hobärghorn and Nadelhorn. As it was about 4 in the afternoon I expected that if anything was loose up there it would’ve already come down by now.

Only when I reached the end of the Ried glacier and had to climb back up to the Windjoch I felt how tired I was. I dragged myself up the steep slope, counting 25 steps, waiting 10 seconds, 25 steps again, till I finally could look down on the Hobalm glacier on the other side of the Windjoch again. As I knew there was nothing left uphill anymore from this point I felt much more relaxed. I strolled over the glacier to the ridge above the Mischabel hut, where I was happy to take off my crampons and walk the easy path down to the refuge.

Back in the hut the owner wanted to know all about my climb and congratulated me with the success. He had seen me starting out on the ridge early that morning while he was climbing the Nadelhorn with some clients, and wondered if I had made it all the way to the Dirruhorn. As I dropped down on one of the wooden benches several of the guests came up to me, asked me what I had done and congratulated me, showing their respect for soloing the route. This had never happen to me before. Soon after I fell asleep, without even eating anything, tired as a dog and totally happy.