“It’s no good. You can’t do this. It’s not working. Go down. You’re gonna fall. Can you feel it? You’re already falling!” The voices in my head were at it again. “Shut up!” I replied, ”You can do this. Just don’t look down.” I looked down. Hundreds of meters below me I could see the heavily crevassed mess where the steep NW-glacier meets the Tiefmatten glacier. 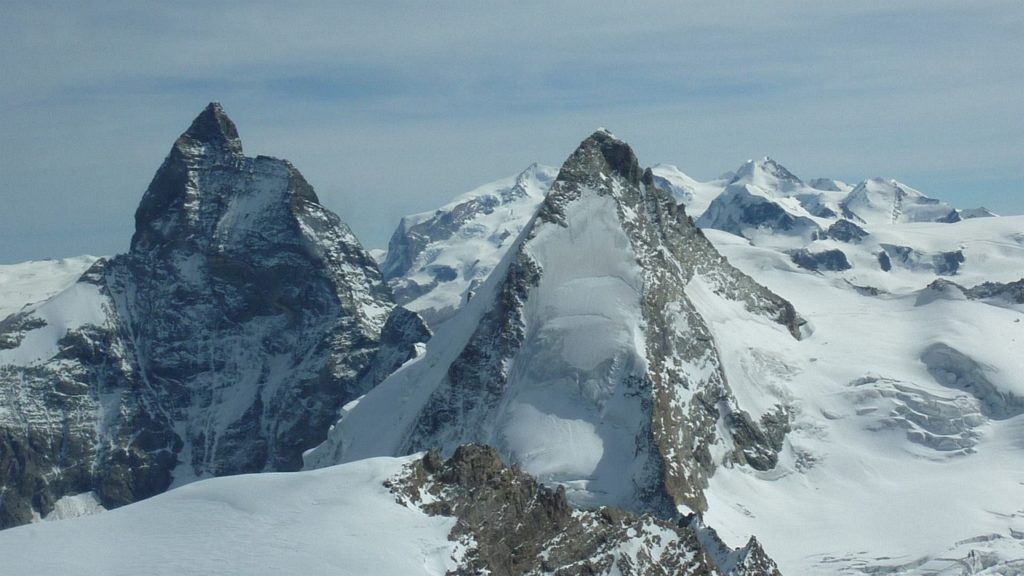 All was not going well this summer. Another attempt at the Barre des Écrins in the south of France had ended in another storm at 4000 meter altitude. A week later I was standing on the Frühstückplatz on the E-ridge of the Weisshorn. A strong wind tried to push me from the ridge. Dark storm clouds enveloped the summit and approached me rapidly. I knew I made the right decision to turn around – before I reached the Weisshorn hut it was snowing – but it didn’t make me feel any better.

Every time when I’m in the Alps and I need a break from climbing, I flee to my favorite hideout, a small campsite at the end of the Aosta valley. There never are any climbers there, only Italian families who have a cabin there and some one night guests who are in transit to places further south. It’s quiet most of the time, it has the best free shower in the world, and there’s a great pizzeria nearby. 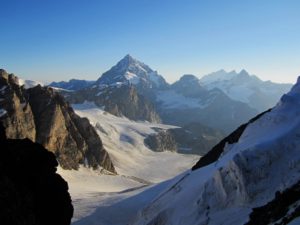 I always arrive unannounced, but still the owner – a friendly woman named Liana – apologizes if the spot by the river where I like to pitch my tent is taken by another guest. The dog Bada recognizes and welcomes me no matter if I was gone for only a few minutes or a full year. Time doesn’t go by as fast there as elsewhere. Or at least it feels like that. The place always brings back the balanced feeling which I need for climbing.

In about a week I would meet up with my climbing partner Helmut again. This year we wanted to climb the Aletschhorn together. I needed some solid climbing to be ready for that. Not so much physically, but mentally. I felt strong and I knew I could climb anything I wanted, but I needed something that would confirm that, something to give me just that tiny extra of self confidence. The Dent d’Hérens could do that, I hoped.

Early in the morning I drove from the campsite through the many small villages of the Aosta valley and turned right towards the Grand St. Bernard pass. Straight ahead the snow covered south face of the Grand Combin stood glistening in the sun. I took another right turn and drove all the way to the end of the wonderful Valpelline. I parked my car close to the dam at the Lac di Place Moulin, a magnificent turquoise water reservoir. 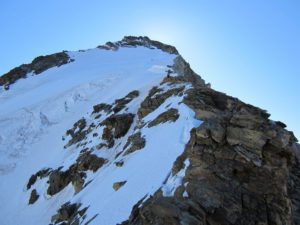 There was a noisy construction site and it was crowded with day trippers on their way to the restaurant at the other end of the lake. I tried to block out all the noise and focused on walking. The further up the valley I walked the quieter it got. Slowly the lush green vegetation disappeared. The valley became a windy barren rock desert. High above me I could see my goal for the day, the Rifugio Aosta at 2781 meter.

In about 4 hours I reached the hut. There were maybe 12 people in the small hut. Some of them planned to climb the nearby Tête de Valpelline, the others would go for the Dent d’Hérens, just like me. There were discussions about the best route, the old one via the SW-flank, or the new one via the Tiefmattenjoch and the complete W-ridge. A local guide supplied detailed information about the conditions of both routes. I’d already decided to take the latter, as it has a shorter glacier crossing and more rock climbing on the ridge, which I wanted to practice.

Next morning my alarm woke me up at 3am. The hut keeper provided a good breakfast. As always I waited till the crowd had left the tiny room where all the gear was. I double checked my food, water and equipment. All seemed to be there. I felt slightly nervous, not knowing exactly what to expect from the coming climb. Time would tell, it always does. Into the dark I went.

From the hut one has to walk back along the track a little while and then go steep up a huge cone of rubble and stones. The day before I’d checked out where this path started and thought I would remember it. Now it was pitch dark. Of course I couldn’t find it. There seemed to be tracks going up everywhere and nowhere.

It was 6am as I crossed the glacier under the dark walls of the Tête de Valpelline. The sunrise provided a faint alpenglow on the east face of the Grand Combin, right behind me. Steep snow led to the beginning of the, well let’s call it gutter that leads up to the Tiefmattenjoch at 3565 meter. This 60 meter high narrow couloir is filled with loose rocks and mud. A thick fixed rope makes it possible to pull yourself up. Forget about decent climbing style here. It’s a lot like a salmon swimming upstream, just start scrambling and don’t stop until you reach the end.

From the Tiefmattenjoch I had a great view north to the Dent Blanche and all other peaks of Wallis. Also for the first time I could see the complete W-ridge of the Dent d’Hérens, which is about 1600 meter long. The first 800 meter it goes up and down over a few small rocky outcrops. This is the most technical part of the route. Walking on top of the ridge was rather easy, but at times there was some serious climbing to be done. It was at the beginning of the second ‘step’ that the voices in my head started to interfere. 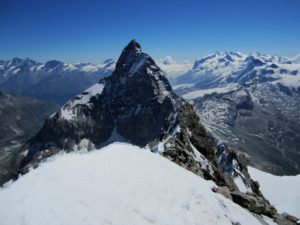 Matterhorn & Monte Rosa from the summit of Dent d’Hérens

Here the route traverses the northern side of the ridge horizontally for a short while and then shoots steep up back to the top of the ridge. The traverse wasn’t that difficult, but it was really exposed and the rocks were icy. The W-ridge was still in the shade as the sun was blocked by the mountain. I tried to focus. There was no way I would turn around and go back. I knew it was only doubt in my head, no real danger.

I took out my 48 meter rope and looped it through a fixed metal abseil ring in the rocks. That way I could climb up secured and didn’t have to go all the way down again to untie the rope. Carefully I started climbing again. I had packed the rope in a small bag that was hanging from my climbing belt. While climbing I let out the rope meter by meter, placing some slings here and there for protection.

I’d learned these solo climbing techniques from UK climber Robert Thornton. I had studied his valuable blog where he describes them in detail, and practiced them over and over again at home and on the rocks of Montestrutto. It felt good, like a safe routine. The negative voices in my head were silenced. Soon I was standing on top of the ridge. 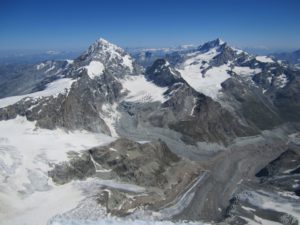 A 500 meter long snow ridge was next. It was about 45 degrees steep but the firm snow gave my crampons lots of grip and it was a walk in the park compared to the earlier rock section. At 9:30 the first rays of sunlight appeared over the summit. I passed a group of 3 climbers before I reached the rock slabs below the summit. They were sloping downward, like huge roof tiles. I tried to climb them free, but they were steeper than they looked and covered with a thin layer of ice. So I put the rope to use once more. There are several metal poles fixed in the rocks on this part of the route. I looped the rope around the first pole and climbed to the next one. There I secured myself with a sling, took in the rope and repeated the procedure. This all took quite a bit of time, but I thought “better safe than sorry”.

Without any further problems I got onto the narrow summit ridge. That final piece of ridge to the main summit looked difficult and very exposed. Left the up to 90° steep north face plunges a full kilometer down to the Tiefmatten glacier. On the right side there was 500 meter of near vertical rock. And the ridge wasn’t flat either, there were some big blocks to negotiate. Funny enough the climbing here turned out to be by far not as hard as it looked. Within 15 minutes I was on the summit. 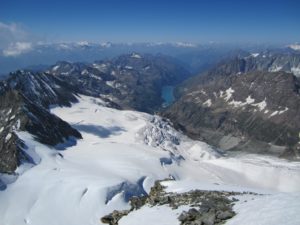 I stayed on the top for about half an hour, enjoying the magnificent view to all the huge peaks around me. To the west there were Mont Blanc and the Grand Combin, to the north the Dent Blanche and Weisshorn, to the east – almost at touching distance – the Matterhorn and further away the Monte Rosa peaks. Looking south, far away and over 2 kilometer further down, I could see the turquoise water reservoir.

Then it was time to climb down again, which went smooth and quickly with some help from the abseil poles. Even the rocks didn’t cause any problems. The ice was all gone now the sun was warming the rocks and also the technical difficulties seemed to have vanished somehow. It was a delight to climb them. I carefully slid down the gutter using the thick fixed rope and strolled along the glacier and the moraine back to the hut.

It was quiet and peaceful there. All other climbers went straight down from the moraine, skipping the hut altogether, and as next days weather forecast wasn’t so good no new climbers had come up. I decided to stay one more night. Being the only guest there I had a whole room to myself and could pick any bed. No snoring people, one of my best nights in a refuge ever! 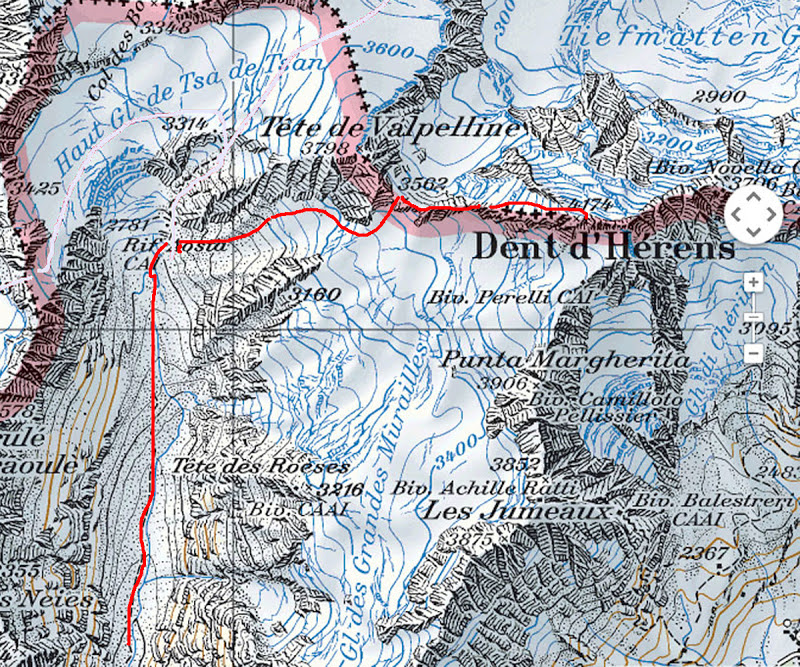