When it rains it pours!

Great mountainbike training today. Almost 150 km in 6:17:13. But – while over 30 traffic lights were either green or could be more or less safely ignored – I had to stop and wait at 24 of them. Without that I probably done the ride in under 6 hours! 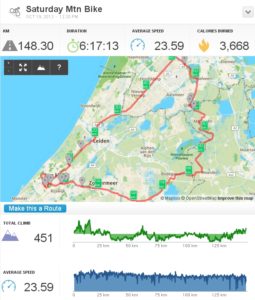 Started out cloudy but dry with little wind. I reached the 50 K point at Amsterdam in just under 2 hours. Refuelled with an AA energy drink at a gas station. Halfway, at the 75 K point, even the sun came out now and then. When getting close to Utrecht a soft drizzle entered the scene. Still not too bad.

After the 100 K point the drizzle changed into steady rain. I ironically ran out of water and had eaten my last Snickers bar at the 125 K point. The rain had become a severe downpour now. That chilled my legs so I didn’t feel the cramps.

10 km before my house all hell broke loose. The sky was dark gray, rain fell like during the Flood and there was so much water on the road that every passing @#%& car caused a small tsunami. Good times.