SWISS PEOPLE HAVE INVADED MY TERRITORY

At this campsite I rent a small old caravan, at the back in a corner where few people come, so it’s nice and quiet. While I was standing inside preparing some fresh pasta, a car drove by, followed by a lot of noise and unintelligible talking. I stuck my head outside. Swiss people. 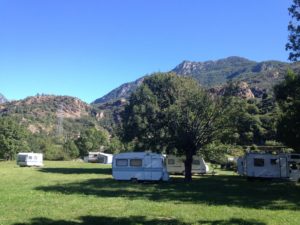 My caravan at camping Mombarone, Italy

Within minutes they’d somehow managed to wringe their caravan inbetween mine and my car, even though there were countless free spaces on the campsite. Great, now I probably have to pay toll to get to my car, I thought. When they were sure they couldn’t possibly manouvre their metal container any closer the woman came over and asked “Wir stören Ihnen hier doch nicht?“, we’re not disturbing you here, are we? I put on my happy face. Large groups of Samourai in full body armour ran accross my mind. She didn’t get it. Away she went.

A small white dog entered the scene. There was a small bell on his belt. While he was running around the bell rang like fricking xmas jingle bells. All. The. Time. I shortly contemplated to explain them the differences between cows and dogs and tell them to remove the bell or I’d paint the dog purple and write MILKA on it. But the dog had gone already.

Meantime my pasta was done and I sat down to eat. Two or three bites later another, larger dog entered the stage. He clearly had a problem. He slowly positioned himself in front of my door. His body was retching, while he made sounds as if he wanted to cough up a rather large piece of farm equipment. Nothing good can come from that. Suddenly he produced a wave of substance not unlike the stuff I was having for dinner, just slightly more yellow. He looked surprised at it, as if he was trying to remember when he ate that. Then he decided that now was a good time and gobbled up the still warm goo.