A nice stroll on the Dom

The peak just left of the centre is the Lenzspitze (4,294m) which was my first objective. I got to 4,135m on the ridge only to find even more unstable conditions with loose powder snow on ice, not ideal for solo climbing. I stopped, stared, thought hard for a while, and decided to back off. The descend wasn’t less tricky. I abseiled the first and most unstable part and free climbed the blank ice the second half. I was glad to be back on the glacier. 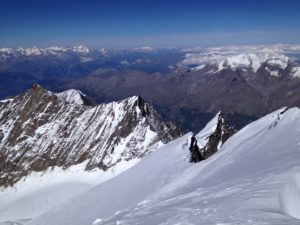 As I had started this climb that very morning at 4am from Randa all the way down in the valley at only 1,408m I knew I’d be gutted when descending without a single summit. So I decided to do Dom instead, which meant climbing another 500 vertical meter through quite soft snow, as it was already 2pm. The trace in the snow was partly blown away or filled with snow, partly trampled by other people descending. So I made a new trace most of the way. I had to dig extremely deep in myself to find the energy and will to keep going.

At about 4,400 meter – with only 145 meter to go – every now and then the wind would pick up and gusts full of ice particles tried to convince me to stop. I pulled my jacket tighter. I was so tired, having already done over 3,000 vertical meter nonstop, but I was determined to reach the summit. These moments reminded me a lot of my solo fight against the fierce storm on Aconcagua many years ago. I tried to motivate myself any way I could, saying to myself I could do it, yelling inside my head to keep moving, admittedly using slightly different words. 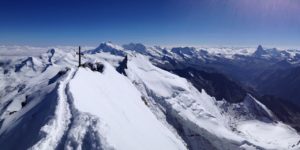 It worked. I reached the top. Besides the strong cold wind on the summit the weather was still perfect. Of course there was nobody there anymore, it was already 4pm. The absence of other climbers made it feel even better. Climbing in it’s purest form, a single climber without the mental support of teammates or a warm cosy hut to start from. I love the concept of that pureness. I hate myself for persuing it.

PS. Next I descended all the way back to Randa, which I reached at midnight, having done a total of 3,300 vertical meter up and down in 20 hours, including breaks.

3300 D+ climb yesterday. Wanted to do Lenzspitze (4294m) but got stuck in the fresh snow on the S-ridge, so went down and did Dom (4545m) instead. Start and finish in the dark in Randa. #byfairmeans #nonstopsolo