Summer 2017 in the Alps was a nice one so far, but it was lacking some high peaks. I’d done plenty of walking and climbing, but nothing over 4,000 meter yet, mostly due to the weather. For some time I was thinking about climbing the peaks of the Monte Rosa group. Of course I’d climbed all of them already, most more than once. But I was thinking about something different. I wanted to climb them starting from the valley, without use of the cable-cars, without sleeping in huts, nonstop up & down. 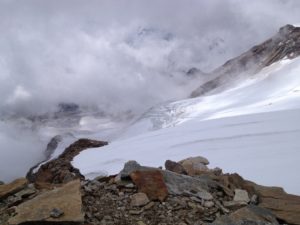 Looking down over the Indren glacier

Planning the trip on the map was easy enough, but I didn’t know what the paths from the valley to the Mantova hut were like. So I had to do some reconnaissance first, before I could do it in the dark. I drove to Staffal (1,800m) at the end of the Gressoney Valley, south side of the Monte Rosa group. Most people take the cable-car here, which goes up all the way to 3,300m near the Mantova hut. But I wanted to do it as pure as possible, so no cable-cars for me. I started walking at 7:20 am, as I needed the daylight to get familiar with the route via the Colle Salza. Turned out to be a good path, very suited for walking in the dark. 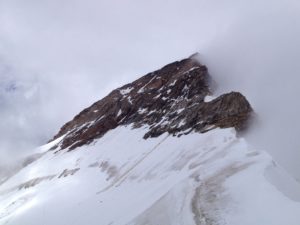 It took me a bit less than 4 hours to reach the Mantova hut at 3,498 meter. There I ate some sandwiches on the terrace, while enjoying the view over the valley and the Gabiet lake. I still felt good, though I wasn’t acclimatised to this altitude very well yet. At 12 o’clock I took off again, first descending a 100 meter towards the cable-car, then taking a left turn up the Indren glacier. After 2,5 hours I greeted the small Madonna on the summit of Punta Giordani (4,046m). Plan was to continue to the Piramide Vincent, but the weather didn’t cooperate. The wind picked up, clouds came rolling in. Time to go home.

I descended the glacier, went up the 100 meter to the Mantova hut again, where I had a quick bite. Then walked / ran down the rocky slopes down to Staffal, where I arrived at my car at precisely 7:20 pm. So far: 12 hours of climbing, 2450m D+, 1×4000 done, and most important, I was familiar with the route now. 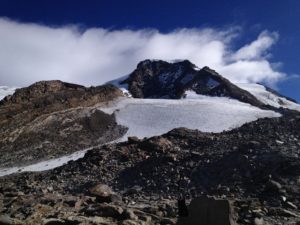 Woke up in my tent at 2:30 am. I really hate to get up in the middle of the night. I need to focus hard to block all thoughts that try to convince me to go back to sleep. To get me started I drank 2 large cups of cappuccino, had a good breakfast with hot porridge, and prepared some sandwiched with brie and smoked ham for the climb. Then I drove to Staffal again, in the dark this time.

It always takes me some time to get used to walking in the dark. I feel clumsy and kinda blind, even with my head lamp on full power. Though I was feeling excited about the next climb, I’d be happy when the sun would appear. I decided to walk up at a gentle pace, about 450 vertical meter per hour. I wasn’t in a hurry. I considered everything I managed to do in the dark as a bonus. 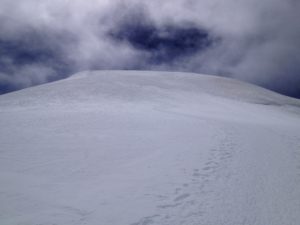 7:24 am I arrived at the Salza pass (2,882m). I had a sandwich there while enjoying the sunrise. Minutes later the cable-car started to operate. An hour later I was at the Mantova hut again, arriving just before the first visitors who’d taken the cable-car. After another sandwich I continued up the Lis glacier towards the Piramide Vincent. The weather forecast was good for today, but soon I was in the clouds, fighting a strong wind on the NW-flank of the Piramide Vincent. It was almost 12 when I reached the top (4,215m) in near white-out conditions. Luckily I know this region very well and the routes are easy, but I was pissed at the weather gods for not sticking to the forecast. 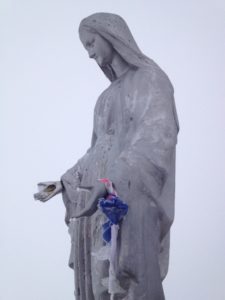 Slightly stubborn I continued towards the Balmenhorn, even though visibility was close to zero. Only 35 minutes later I stood next to the small bivouac on the top of the Balmenhorn (4,167m). A bunch of Polish climbers took shelter inside the tiny hut and called it a day. But I wasn’t done yet.

I strolled trough the blizzard, in the direction where I expected the Schwarzhorn, my next goal. When I arrived at the foot, a group of 4 Italian climbers had just started to scale the 50° steep 50 meter high icy face. It took them forever to cross the Bergschrund, while practising the strangest rope techniques. They climbed simultaneously, one right behind the other, with the rope hanging in large loops, without using a single ice screw or other kind of anker. 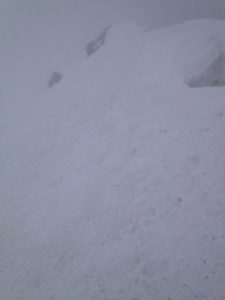 White-out on the Ludwigshöhe

With the use of my 2 ice axes I climbed over the large Bergschrund and followed the Italians to the summit, making sure to stay clear of their fall line. Just 50 minutes after the Balmenhorn I was standing next to the Madonna on the Schwarzhorn (4,321m). The Italians were going to abseil, which promised another rope show, so I decided to get out of their way and descend. I was already down and on my way before the first of them was even clipped into the rope.

The weather stayed about the same, near white-out conditions.There were 4 more summits. Could I continue? Maybe. Should I? Maybe not. I walked towards the Ludwigshöhe. Finding it wasn’t all that easy. I had to navigate by projecting the map in 3D in my head.

I found a ridge. After 50 meter it ended in huge crevasses. No way there. I went back and walked around the ridge. That was the right way. 45 minutes after the Schwarzhorn I was on the Ludwigshöhe (4,341m). I tried to continue even further towards the Parrotspitze, but there’s a large plateau here, and the trace had completely faded away in the blizzard. My hope that the weather might improve in the afternoon was just wishful thinking. Time to go down. 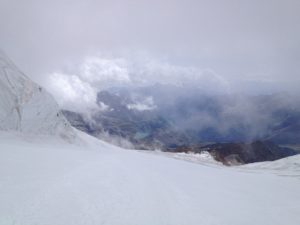 On the Lis glacier near the Gnifetti hut

Near the Gnifetti hut I exited the clouds. I could even see some sun in the valley, so I decided to take the long way down. First to the small community of Gabiet, and from there down to Staffal. The first part was really nice with some amazing scenery. The second part started with a crazy steep stairway that almost killed my knees. It was 20:30 pm and dark when I reached the car. Score today: 16 hours of climbing, 2750m D+, 3×4000 done.

“Oh crap, not this again”, was my first thought when my alarm woke me up at 2:30 am again. Same zombie routine as before. Same drive to Staffal in the dark. Well, almost the same. Halfway 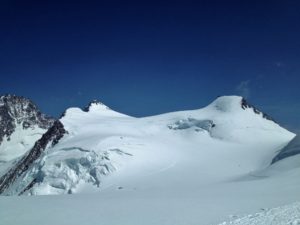 I noticed a car behind me. I was driving pretty fast. Not speeding, as this is a narrow mountain road with countless curves, just enjoying the ride on this nice quiet road. But still it somehow felt like a serious car chase. The other car followed me all the way to Staffal. Turned out to be a police car. I parked and started to prepare my gear. Then I saw 2 police men approaching my car very cautiously, like I was some high profile criminal they had to arrest. Don’t really know what they expected, but after they found out I was only there for climbing it was all OK and they left.

This 2nd trip I wanted to take the same route up to the Mantova hut as I’d walked down the other day. After about half a hour the road was blocked by an electric fence. A bull was staring at me in the dark. It was spooky. I didn’t want to disturb the bull. So I turned back a few 100 meter and took a path that was supposed to stick to the left flank of the valley. 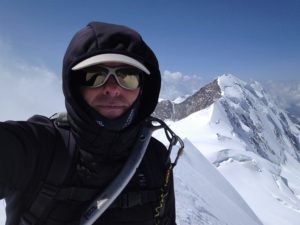 I found it, but lost it a bit higher up in the trees. Had to go back again and try another path, which turned out to be the right one. A rarely used path, clearly the road less taken.

It was about 6 am now and slowly getting light. 3 dogs welcomed me near a farm at the end of the valley. No other people in sight. Perfect. At 7 am I reached Orestes hut at 2,600 meter. For some time my mind was telling me it needed coffee. Unfortunately there was nobody awake in the refuge yet, apart from a lonely cat. So no coffee. The cat joined me for a while, then sat down and watched me climb the steep path. 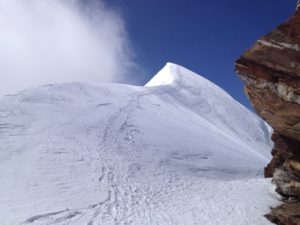 It was 10:30 as I left the Mantova hut. Today the weather looked a lot better. The sky was dark blue and there was almost no wind. Quickly I made my way up the Lis glacier, passing large groups of climbers. At noon I was at the Lysjoch from where I could see the 3 peaks I planned to climb today. There was no direct trace from the pass to the Parrotspitze, so I decided to make one myself. One hour later I had climbed the steep narrow SW-ridge of the Parrotspitze (4,432m) and was enjoying the amazing view on all the peaks around me. 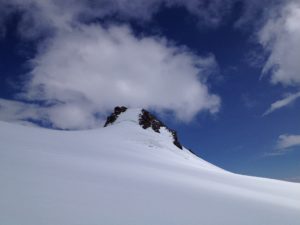 After a short descend I got to the main trace again. 4 Polish climbers were 100 meter ahead of me. I soon reached them. One of them was flat out in the snow, laughing. They were dead tired, they told me. They wanted to go to the Margherita hut on the summit of the Signalkuppe, the highest hut in the Alps. They asked what I was gonna do. I told them. They looked at me in disbelief, as if I wasn’t real. I continued towards the Zumsteinspitze with a good pace. It was 2:30 pm when I reached the top (4,563m), and the highest point of my 8-summit-plan. Then I rushed down and walked to the Signalkuppe (4,554m), where I arrived short after the Polish group. I didn’t want to take off my shoes and all, so I didn’t go inside. Instead I had another sandwich outside and headed down soon after. 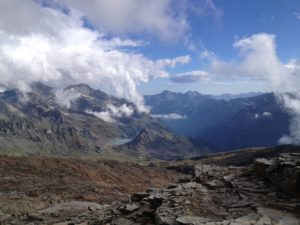 The Gabiet lake and the Gressoney valley

Walking down was amazing. It took little energy on the solid trace. And there was nobody else out there. I had all the mountains and glaciers to myself. The sun warmed me, there was no wind. It was pure magic. Felt like I could keep on walking forever.

It was a 2,750 meter descend to the car. Normally not the nicest prospect, specially for my knees, but it was like a walk in the park. Must have been the boost of completing the plan, reaching my crazy goal of climbing 8 peaks over 4,000 meter from the valley. I took the quickest route down to the valley and reached the car just after dark. 16 hours again, 2950m D+, 3×4000 done today. 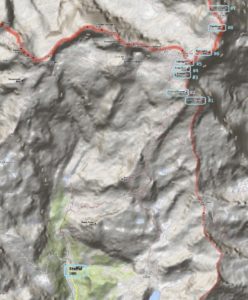 Monte Rosa map with starting point and the 8 peaks