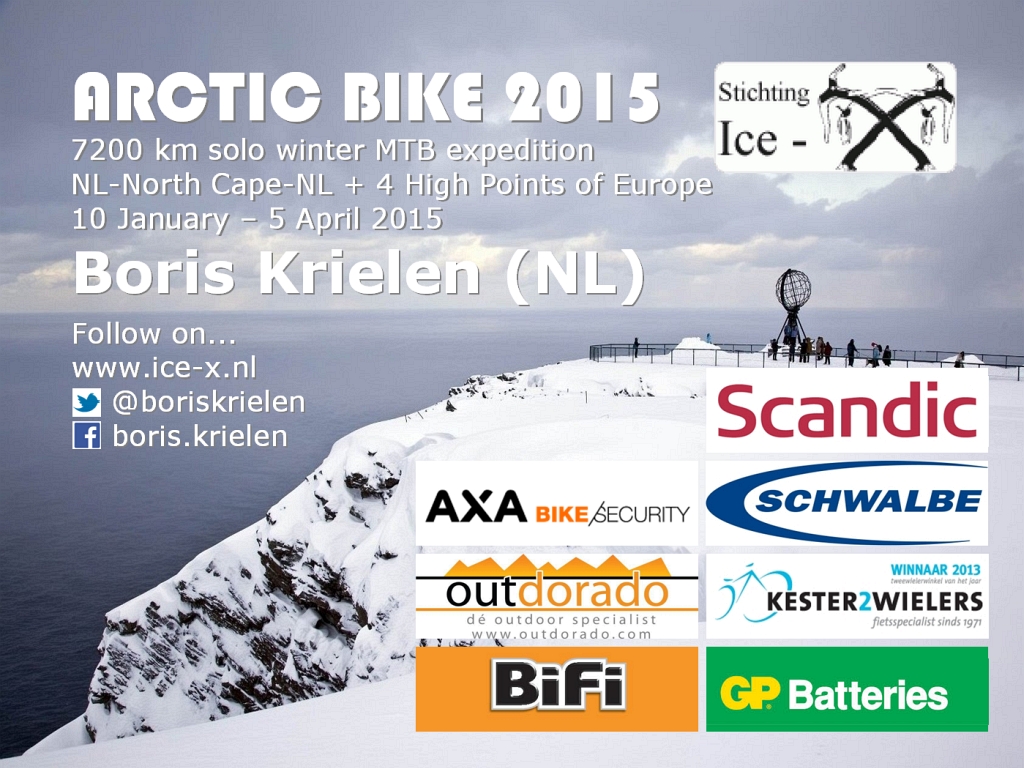 10 January 2015 Boris Krielen set off on an epic journey through Scandinavia. During the coldest and darkest period of the year he planned to bike 7,200 km from the Netherlands to the North Cape in Norway, and back.

“Unfortunately after 2000 km I have to pause my solo winter MTB expedition until further notice. Though the whole trip hasn’t been particularly easy, the last few days were tough beyond belief. Seems I crossed some line there. My mind wants to push on but my body unplugged itself from the system. A mix of over exhaustion and flu. It’ll take some time to recover. I’m flying back home on Friday, but I’ll leave most of the gear here in Sundsvall. If I recover quickly I can return and continue where I left off.” 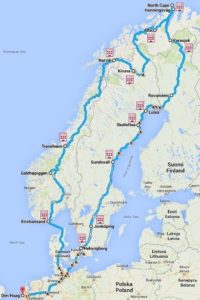 Boris will start biking in The Hague in the Netherlands, reach the northernmost point of the route at the North Cape, and return to The Hague. On the way up he’ll cross Sweden and Finland. On the way back he’ll go through Norway.

Extra challenges are added by climbing the highest points of Denmark (Møllehøj 171m), Norway (Galdhøpiggen 2469m), Sweden (Kebnekaise 2113m) and Finland (Halti 1328m). While Møllehøj is hardly more than a bump in the road, the other 3 require quite a detour by bike and even days on foot with snowshoes to reach and climb them.

The main distance will be covered by mountainbike, a BULLS Copperhead 3, specially prepared by Kester2Wielers in The Hague. Short parts are done on foot, to reach and climb the 4 high points. Water crossings are done by ferry and kept to a minimum.

The mountainbike will pull a small trailer to carry all the necessary biking, climbing and camping equipment. Nights will mostly be spend outdoors in a tent. Meals will be prepared on a stove. Food will be purchased locally.

At regular intervals – about once a week – indoor stops are planned to shower, wash clothes, recharge batteries, and recover in a normal bed. Several Scandic Hotels have generously invited me to stay with them. Former expeditions have showed that these stops are crucial to boost moral. Also these stops are perfect opportunities to arrange interviews and post updates on social media.

Extreme performances require the best of knowledge, equipment and preparation. I can count on the support of…