The Huayna Potosi is the 6,000-er that is the closest to La Paz, a city surrounded by high peaks. La Paz itself is the highest capitol in the world (although in Bolivia Sucre is considered as the capitol, while La Paz is the countries largest city). Huayna Potosi summit towers to the sky, just 25 km north of La Paz. This makes it the most frequently climbed mountain in Bolivia. 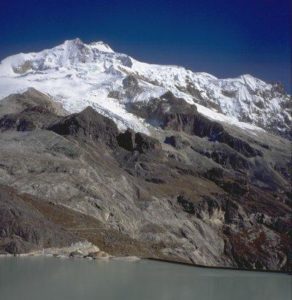 Huyna Potosi from the Zongo pass

The mountain is easy to reach. The drive from La Paz to the slopes of the mountain takes only 2 hours (by jeep). That is why some people call it the easiest 6,000-er in the world. The normal route is an easy glacier climb.

We want to scale this mountain by the French route (via de los Francese). This route was opened in 1974 by two Frenchmen. This route will lead us to the impressive East face. At the beginning of the route, we will encounter some serious crevasses. The size of these crevasses has an advantage and a disadvantage. The advantage is that they are easy to locate, because they are not covered in snow. The disadvantage is, that the route is hard to find. You can not jump over them! The last part is the most difficult, the steepest part is right before the summit.