The Illimani is the highest and southernmost summit of the Cordillera Real and dominates the La Paz skyline. Glaciers flood in all directions, starting at it’s 50 meter high, vertical summit face. It is not a large mountain range, the glaciers are only 8 km wide.

From La Paz, it seems like the Illimani has 3 summits, but there are more summits, invisible from La Paz. Hans Ertl described Illimani as one of the most beautiful and impressive mountain ranges in South America. 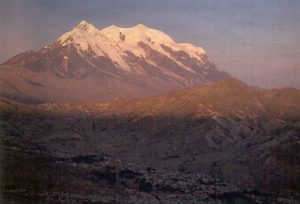 The most dangerous part of the climb is at the start of the face, where a steep ridge has to be scaled. The condition of the route varies through the season. In the beginning of the season, it is covered with snow. Later, it is nothing more than bare ice. Once we are on the summit, we will find out that we are not there yet. To reach the main summit, we have the climb on a very exposed ridge. This climb is know as being a very cold one, because the sun raises on the other side of the mountain. But we can not start late with this climb, because snow and ice condition will deteriorate in the afternoon.