Route, base and high camps

Peak Lenin (7,134 meter) is very accessible and the normal route is without technical difficulties. 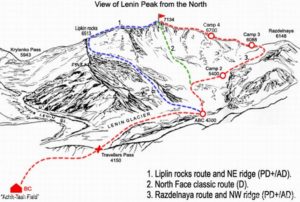 On the other hand, a lot of mountaineers fail to reach the summit due to the low temperatures, rarified air, gale-force winds during bad weather and poor physical training. Memorial plates fixed to a small rock on the edelweiss glade are reminders of the many tragedies, that have taken place on the peak.

Achik-Tash Base camp has an altitude of just 3,600 meter. It’s easy to reach by off-road truck. The camp is based on a flat area with grass between some small hills and several tiny lakes. Another name is ‘Edelweiss Glade’ because there’re thousands of these flowers in and around the camp. The camp has a large dining tent, several two-person tents for the climbers, a kitchen and even a sauna!

This second base camp, at the far end of Union Glade, the large plain at the foot of Peak Lenin. Till here it’s possible to drive with a 4×4. Our trip is supported by Pilgrim Tours until this base camp. Climbers and luggage is delivered here. Tents are available and food is served three times a day (extremely wow!). Perfect place to start the expedition. During the expedition we can – if needed – always descent to BC and count on the support and luxury service there. A good and safe thing to know!

A fixed camp on rocky morenes, between two glaciers. This camp can be seen as advanced basecamp (ABC). There’s food-support here three times a day. Not bad, although the food is not so abundant as in BC. Also tents are available here. Bad quality though. At the end of the expedition the door of our tent was torn completely! Not so nice as it snowed a lot almost every night.

Route camp 1 takes about 6 hours. It starts with a nice walk across the grass-plateau to Union Glade. There the route goes up between steep rocks to the pass at 4,200 meter. You can see the whole glacier from the pass, an excellent view! Bad thing is, on the other side you have to go down to the glacier all the way. There are some very tricky steps to take before you reach the glacier. Getting on the ice is not difficult, though the route up is quite steep. Route finding on the glacier is very hard and lot of climbers of the group have spend many hours searching camp 1.

This camp is situated on a rockband just above the glacier. There are good places to put down the tent and lots of stones to fix it. There is some running water, you can hear it, but it can be hard to find. View is spectacular. The northwest ridge of the mountain surrounds the camp as a theather. Great snow-and-rock-avalanche-watching here! The toilet here is an open area higher on the steep rocks, where you can look down about 500 meters.

Normally climbers use the ice caves on the top of Razdelnya Mountain as camp 3. Using tents here is quite tricky, as the wind is extremely severe almost all the time. One ice cave can give shelter to 4 to 5 people and is about 1 meter high. The other cave is very small, just suited for 1 or 2 climbers and so low, you can’t even sit upright. No place for claustrophobics!

Route to camp 3 is tough. First there’s a 100 meter steep wall of snow and ice to climb. Then the route is not so bad, going up the first part of Razdelnya Mountain. A part of the route is even flat here. Great place to enjoy the view and have lunch. The next part, up the mountain is very steep with deep snow mixed with hard ice. One step you’ll be on top of the ice, next step you’re sinking waist-deep down in the snow. While climbing up, on your lefthand you can look down about 1.000 meter all the time.

Route from camp 3 to the summit is very tough. It’s seven kilometer horizontal and goes up and down several times, making both ascent and descent hard. First part goes down 50 meters to the saddle. Then the route zigzags up quite steep between snow covered rocks. A large snow plateau has to be crossed and some smaller snow-bumps on the ridge. At the end there’s a mountain on a mountain. From here the next part looks extremely far away and high. And it is indeed never ending. Going up steeper and steeper reaching the point where I returned (6,800m). After this point there’s another plateau and another going-down-and-up-again before you will reach the summit plateau. Even there the summit is not close. Takes another two hours to reach the real summit and it might be very hard to find in bad weather.