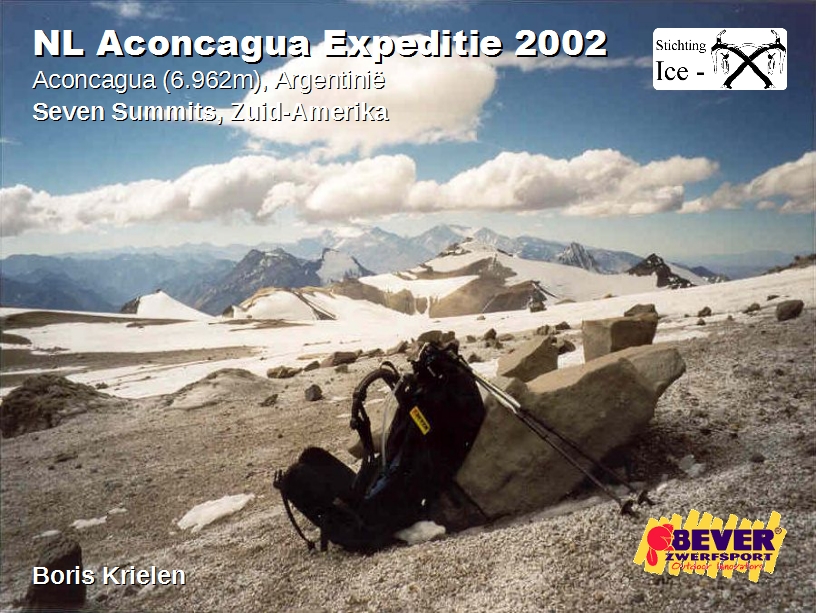 It’s the first time a Dutch climber reaches the summit of Aconcagua all solo & unsupported (without any help from other people or mules or using local facilities) during the off season (after closure of the park on March 15, officially considered as a winter ascent).1

The Ice-X climbers want to climb all Seven Summits, the highest mountain of each continent. July 2000 the top of Europe – 5,642 meter Mount Elbrus in the Caucasus – was climbed succesfull. This time Aconcagua was the main goal, with 6,962 meters the highest peak of South America.

1 The Expedition Commission of the NKBV (Dutch climbing and mountaineering association) confirms to have no record of earlier similar successful attempts. Also other international climbing organisations and climbers ‘allow’ us to write this claim here. If anybody begs to differ, please contact us asap.

“I want to enter the Parque Provincial Aconcagua little after 16th of March – the day the Park closes. By that time not much other climbers will be in there anymore and conditions are more severe than in December / Februar, the high season, when big crowds arrive at base camp to climb.

Aconcagua 2002 is equipped
by Bever Zwerfsport

As the winter season starts end of March on the mountain, lots of snow, storms and extreme cold are very possible. What I like most is the loneliness, I have to take care of myself, I’ll have to cope with this loneliness,nobody to help me, just me and the mountain, very pure, the idea to do a first ascent.

Because the park will be closed I have to do some extra effort to get access. Before a notary in Mendoza a declaration must be signed in which I state that I have the required experience, and equipment for a solo off-season expedition, that I take all responsibility myself and a whole lot of other points. The required insurance is arranged by Hienfeld, via the NKBV, the Dutch mountaineering association.

I’ll be in South America for a whole month, which should give me plenty of time for climbing Aconcagua. If there’s some time left I might do some more climbing elsewhere or just lay back and relax. There’re no fixed plans for after Aconcagua, so no rush.

Technically the normal route on the mountain is not difficult. The altitude of almost 7 kilometers, the time of year and the fact that I’ll climb solo still turn it into an extreme and daring expedition.”

# Boris after the expedition:

“It was everything I wanted, everything I expected and more. Entering the park there were three other groups of climbers, but as I climbed to high camp, the last group left the park and I was completely alone on the mountain. A very exclusive experience with large mental impact. Most of the days the weather was perfect, except one. I encountered the Viento Blanco – the feared snowstorm – the day I tried to reach the summit, giving me frostbite on my nose and fingers.

Temperatures dropped below 20 degrees C minus. Emotional pressure caused by the lonelyness was more severe than I thought, even much worse than the physical effort. Probably this was the hardest time I ever had. Still there were tons of exceptional moments, wonderfull views, moments of pureness, spiritual completeness, little birds visiting me in the morning, great changes in the way I think, moments of surpise and great happyness. Unforgettable, untouchable, mystical.”

On the website of ACOMARA AconcaguaExpeditions.com you can find lots of information about Aconcagua, like location, routes, permits, weather, logistic support, etc.